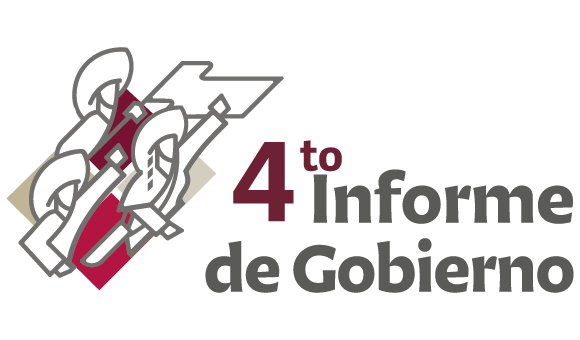 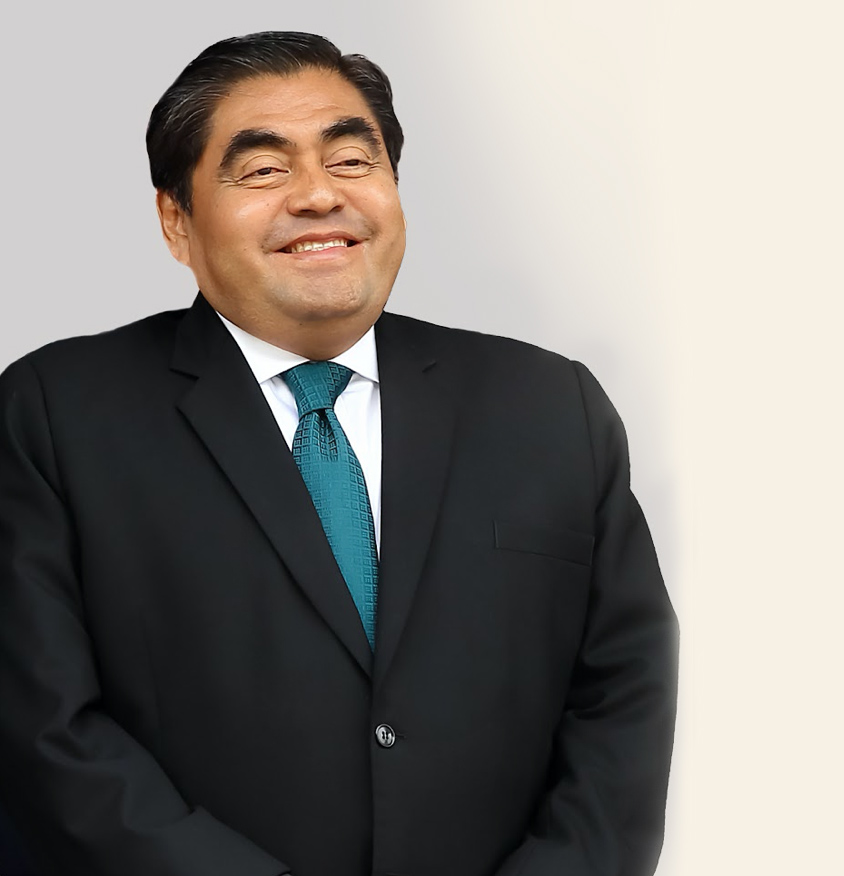 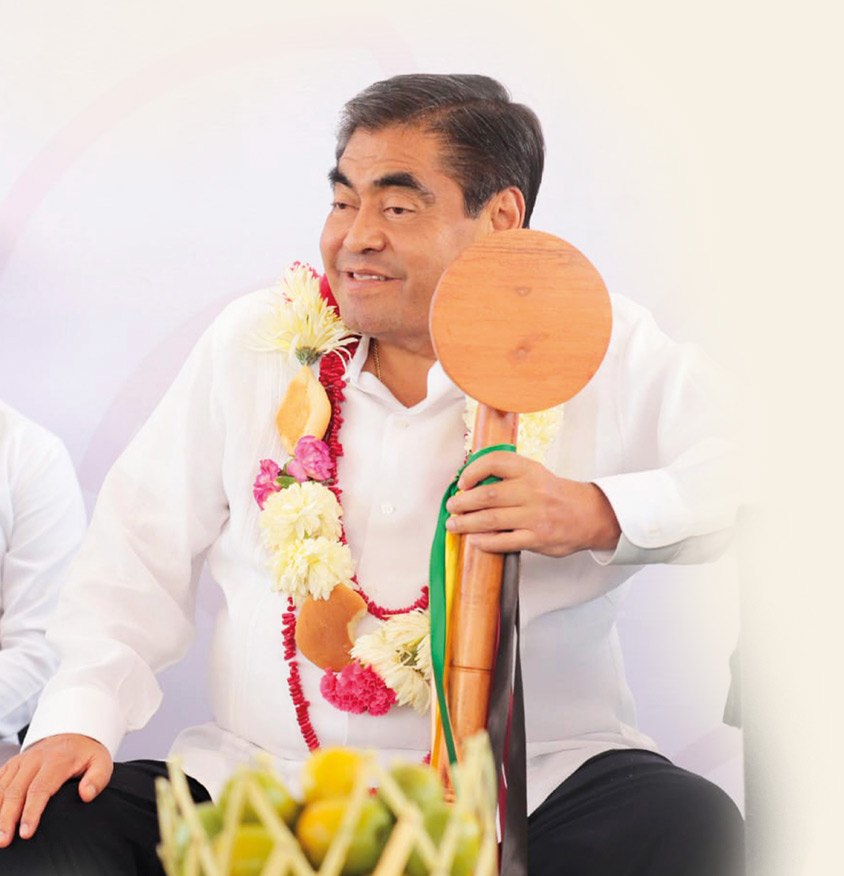 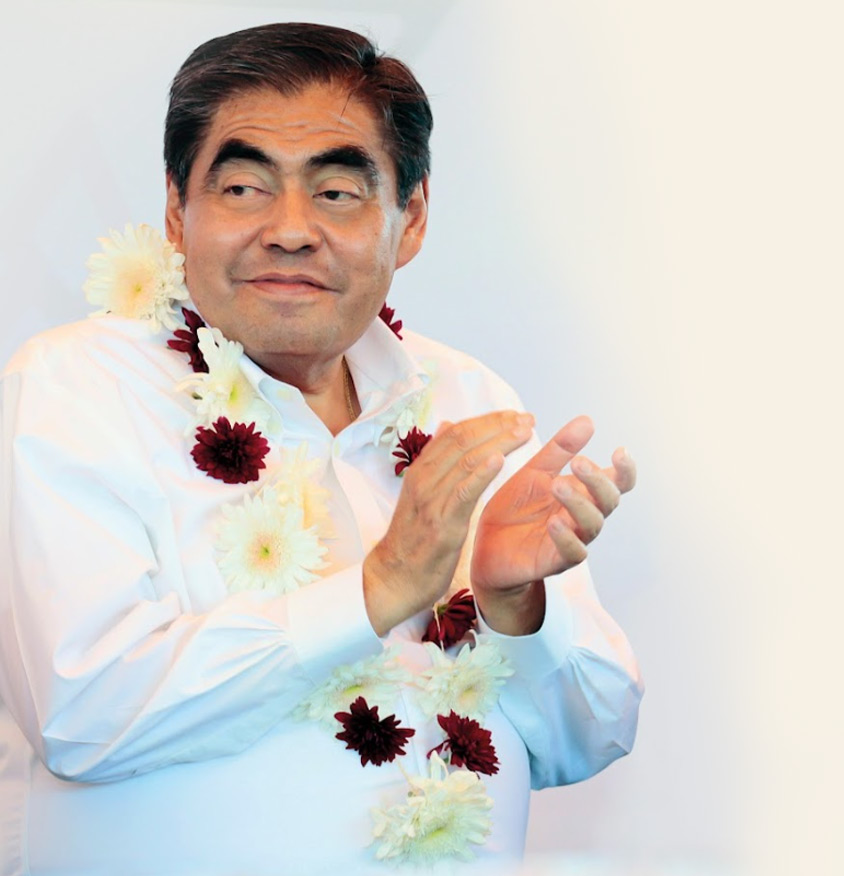 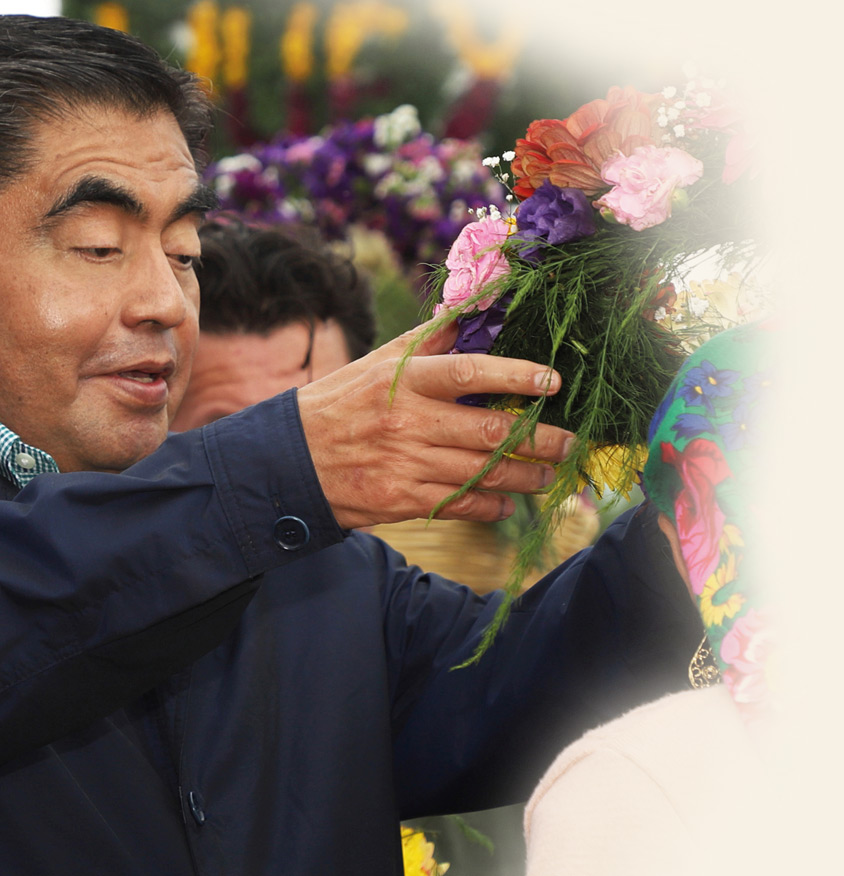 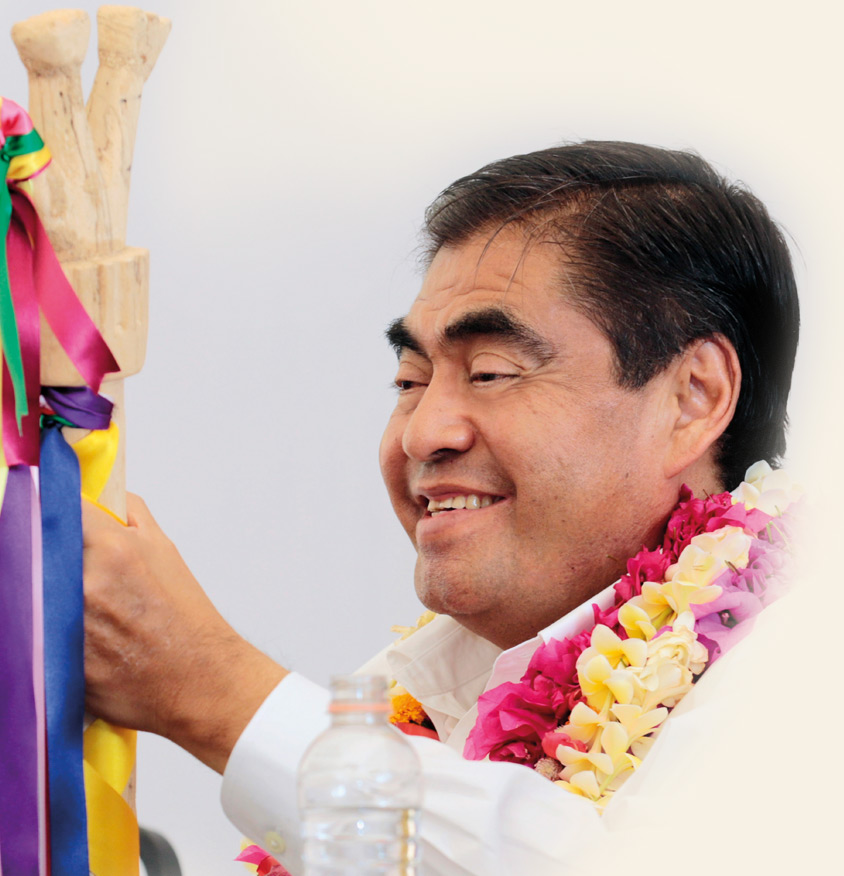 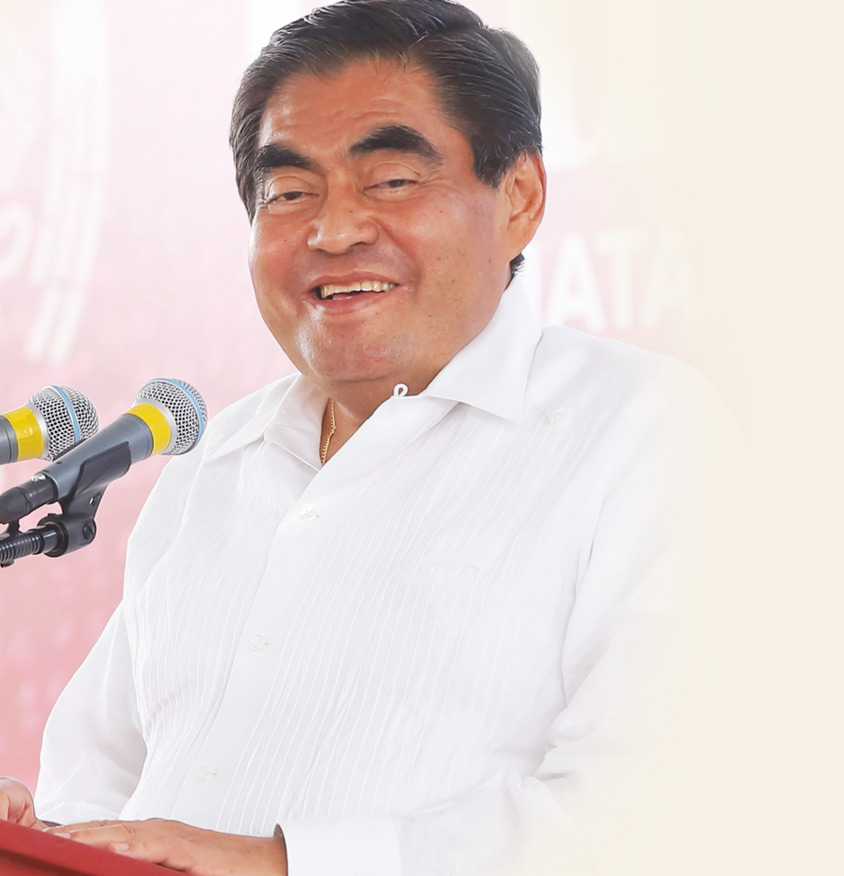 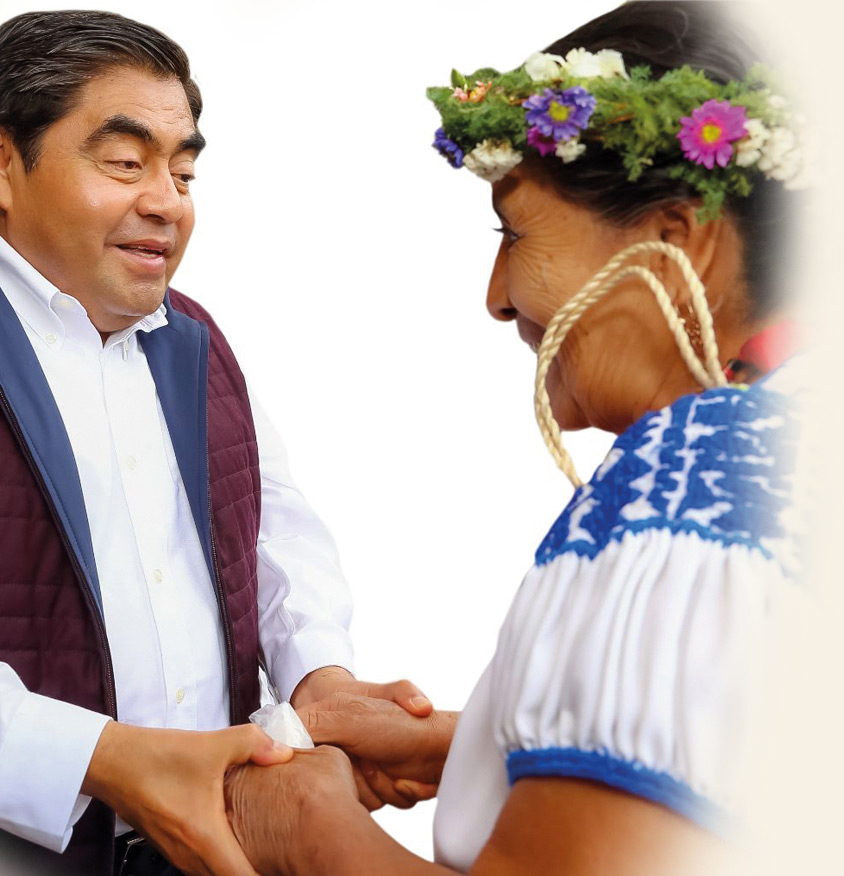 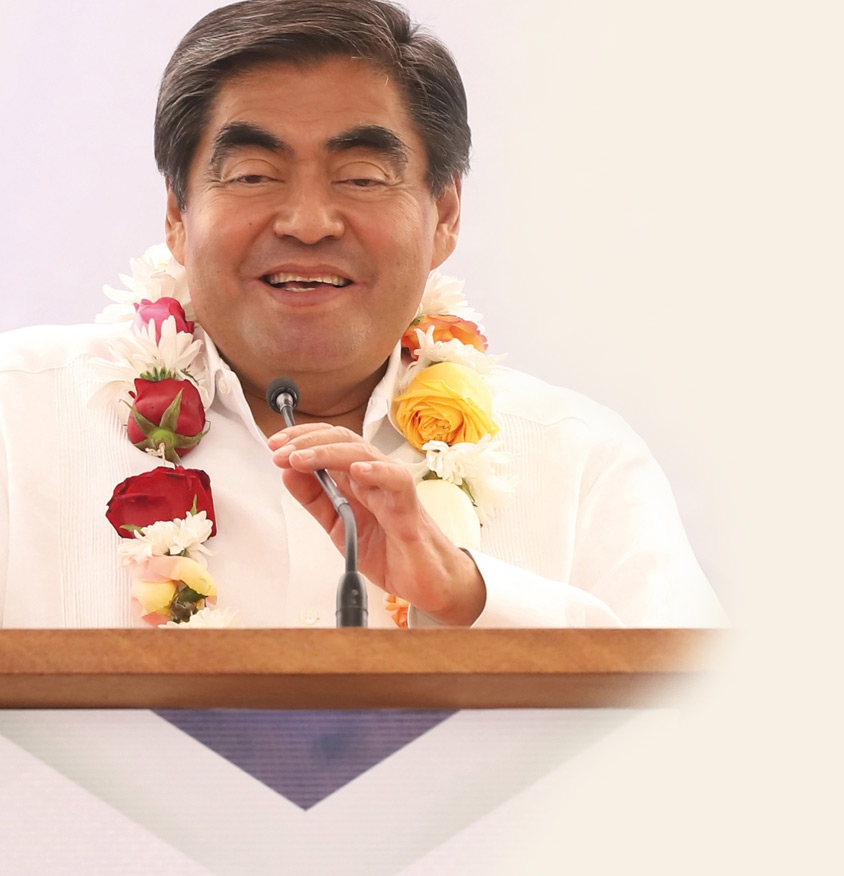 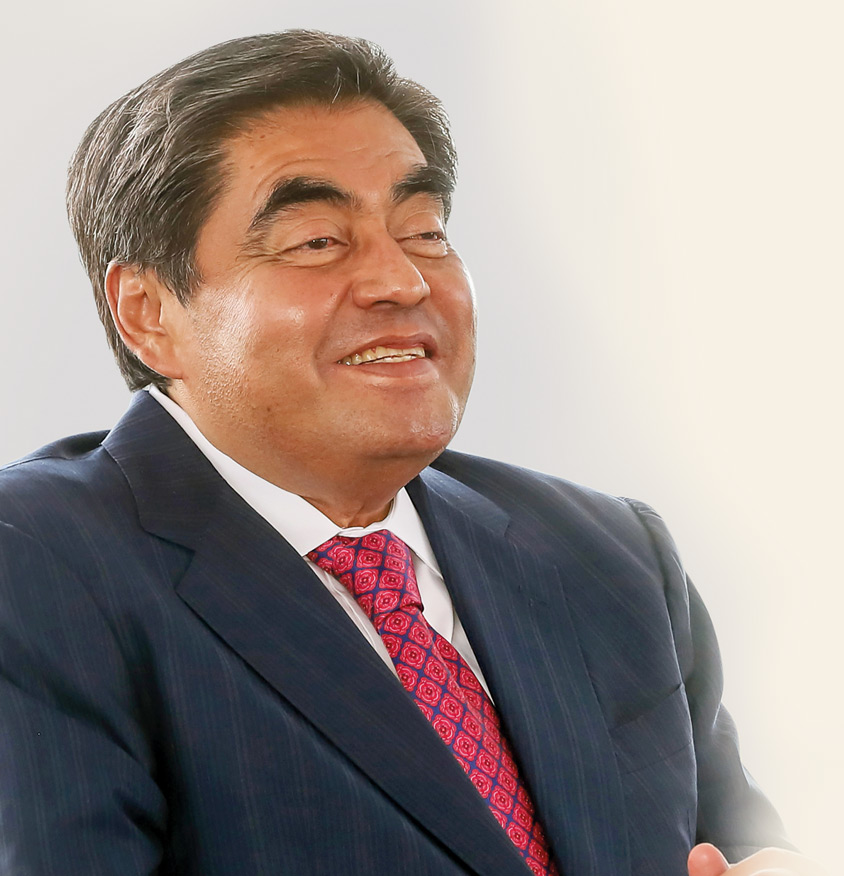 Message from the Governor

As an exercise of accountability, and in compliance with the provisions of Article 53 of the Political Constitution of the Free and Sovereign State of Puebla, I present my Fourth Government Report, which covers the period from January 1 to November 30, 2022. It is an honor for me to inform the Honorable Congress of the State of Puebla and the people, about the actions carried out within the framework of my Administration, linked to the 2019-2024 State Development Plan.

More than 3 years after my swearing-in, the commitment continues to be with the people most needed, for this reason, I have installed a left-wing government following the principles of the Fourth Transformation of Mexico, aimed at consolidating a society with social justice and human sense, in which the people of Puebla can fully develop; this is a government with principles and values.

I have undertaken a Government close to the people, interested in society and seeks real solutions to its problems, through the construction of ever-stronger direct channels of dialogue, not only in the capital but also in all regions.

In the context of overcoming the pandemic, we promoted COVID mitigation and prevention strategies to reopen social and economic activities completely, where we joined efforts with the people to strengthen the community pact. Thus, the actions promoted by this Government for the benefit of people in vulnerable situations, so as not to leave anyone behind, were recognized nationally; we are a resilient government that seeks to recover economic and social development while caring for the health and well-being of its people.

We work together with the people to spread the pride of being poblanos, living in a state full of culture and history in each of its municipalities, located in a geographical position conducive to the economic development of the country and the exchange of knowledge, in addition to a fertile territory and different climates that favor the production of crops of high commercial value; for all of this and more, this Government promotes the adoption of the Tienes Ganas de Puebla brand for it to be used by society.

On the other hand, it is essential to mention that in this Administration corruption has been fought and will continue to be fought firmly. Work is being done to build an honest and responsible society that is respectful to the law too, which does not respond to the interests of a few above the needs of those who need it the most, so that, public real estate has been recovered for the enjoyment of all Puebla’s families. Public officers conduct themselves with rectitude, since this Government does not allow anyone to take advantage of their position to commit abuses in the exercise of their functions, and whoever does so, will be punished under the weight of the law.

My Government is committed to ensuring that there is security, justice, and the rule of law in the state, and we work every day to achieve that. In this sense, forceful actions against crime have been carried out; that contribute to achieving an environment of peace in the state, which has allowed the regions not to be dominated by crime, and we have not been indifferent to the illegal acts that affected Puebla so much, as was allowed in previous Administrations. In addition, we are allies of the 217 Town Halls to guarantee the rule of law and legal certainty throughout the state, especially for those in vulnerable situations.

The recovery of the Puebla countryside continues to be a priority for my Government, therefore, the promotion and modernization of the main production chains in the different regions of the state, such as coffee and agave, continue, without losing sight of the fact that the results obtained are thanks to the effort and dedication of the producers of the Puebla countryside, with whom we work together without intermediaries to increase the quality and, consequently, the value of their crops.

In this framework, we have worked to promote economic development for everyone, giving support for the installation and development of Puebla businesses, while seeking to attract investment and promoting tourism for this state that symbolizes history, culture, natural beauties, and fertility, as the best destination for investors and visitors to fall in love with Puebla. Likewise, we seek to promote decent employment and support entrepreneurs with innovative schemes. It should be noted that the economic development in the state is the result of the conditions of infrastructure, human capital, connectivity, public security, and stability, among others, which have been promoted from a transversal approach, but above all, sustainable.

My Government's objective is to reduce social inequities and combat poverty in all regions, as well as to guarantee access to fundamental rights, such as quality education and health, and decent housing, just to name a few, and for this purpose, public policies have been carried out in benefit of people, especially those who are in a situation of vulnerability; today the heart of Puebla beats harder in favor of those in need.

Work has been done to achieve a democratic, innovative and transparent government for the benefit of society, through the simplification and digitization of procedures and services, with a model focused on the implementation of a digital government. The responsible exercise of results-oriented public resources is fundamental, which is why this Administration continues with a zero indebtedness policy, facing the obligations and payment commitments acquired in the past without failing to meet the needs of the people of Puebla, under a sustainable development approach; we are a government committed to austerity and to strengthening the public finances of the state.

The development of public works with a social sense is promoted, to increase the development conditions of the people of Puebla and not in sumptuous actions as displayed in the past. In this Government, the presence of native communities is recognized with actions that benefit their organization and participation in decision-making that seek the persistence of the culture and traditions that gave origin to our identity as poblanos, which we all should be proud of.

Without a doubt, during this period bold actions were carried out for the benefit of the people of Puebla, especially those who have less, under an orderly approach, but above all, honest and close to the people; the work continues and the commitment of my Government is reaffirmed daily; respectful of the autonomy of the Powers of the Union and the municipalities, thus obtaining a co-responsible environment that guarantees closeness to people.

Puebla is great from its roots, in its history, culture, customs, and traditions, but mainly from its people; that is why we are a government of the people, of the people who make Puebla great.

CONSTITUTIONAL GOVERNOR OF THE STATE OF PUEBLA